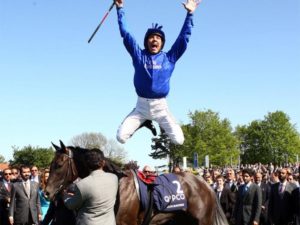 Lanfranco ‘Frankie’ Dettori has experienced his fair share of ups and downs since his halcyon days in the royal-blue silks of Godolphin, but remains one of the most recognisable and popular jockeys in the country. For readers of a certain age, Dettori will always be best remembered for winning all seven races on the highest profile race day of the year, the Festival of British Racing – a precursor to British Champions’ Day – at Ascot in 1996.

Perhaps the person with most cause to remember that fateful day is Darren Yates, nowadays a high-profile racehorse owner but, at the time, a self-employed joiner in Morecambe, Lancashire. Having latched onto the fact that the Godolphin horses wintered in Dubai were some way ahead of their British counterparts, Yates backed four of them – Wall Street, Diffident, Mark Of Esteem and Fatefully – all trained by Saeed Bin Suroor and threw in Dettori’s other three mounts, combining them in a £0.50 Super Heinz, plus an additional £1.00 each-way accumulator, for a total outlay of £62.00.

The rest, as they say, is history. The first three Goldolphin-trained horses won the Cumberland Lodge Stakes, Diadem Stakes and the feature race of the day, the Queen Elizabeth II Stakes and, following an easy victory for Decorated Hero, trained by John Gosden, in the Tote Festival Handicap, Fatefully duly completed a four-timer for Sheikh Mohammed’s operation in the Roseberry Rated Stakes. Dettori made all the running on Lochangel, trained by Andrew Balding, in the Seal Stakes and repeated the dose on Fujiyama Crest, trained by Sir Michael Stoute, in the closing Gordon Carter Handicap. His unprecedented seven-timer paid 25,095/1 at starting price, but 235,834/1 at best odds and cost the bookmaking industry an estimated £40 million or more; Darren Yates profited to the tune of £550,823.54.